A milestone for the grande dame of medallions

Lindley Briggs excels in many art forms, from collages to sculptures, but in recent years she has made a deep study of one specialized medium, the bronze medallion. I used to associate medallions with simple images — heads of monarchs or Olympic rings. But Lindley, my friend and neighbor in Newburyport, Massachusetts, can create an entire mythical world on a four-inch disc. In her clever hands, nature assumes a molten state that enfolds earth and ocean, sky and heaven. Shells emerge from heads. Heads emerge from shells. Wings emerge from shells and faces and heads, lofting men and women into amorous flight (Lindley and her sculptor husband, Jeffrey Briggs, seem to be one happy couple). It’s no wonder these lustrous metallic scenes have been celebrated in exhibitions throughout Europe.

For me, though, one Lindley medallion stands out. Hidden Watchers is darker, a shift away from her usual raptures. It’s an image that comes with a splash of cold water: an ocean engulfing a row of human faces. The people peer out from a gap in the waves, hiding from the encroaching sea, observing but not acting. Hmm, remind you of us? What grabs me is the amount of potential energy in the scene: the laws of physics want the two halves of that ocean to snap shut, swallowing the watchers without a trace. But for now they have a slim window. Just.

Of course, the piece doesn’t have to be about rising tides. You can substitute any menace, any impending cataclysm, and peg any identity on the row of observers. My mind’s eye, which often goes to weird places, takes me to a heavily fortified observation bunker in the Chihuahuan Desert of New Mexico. It is the early morning of July 16, 1945, still dark. The faces peeping from slits in the wall belong to the scientists who have gathered, exactly 10,000 yards from Ground Zero, to witness the detonation of the first atomic bomb. They are nervous. Some of them wonder, as did the physicist Enrico Fermi, whether the bomb will “ignite the atmosphere, and if so, whether it would merely destroy New Mexico or destroy the world.” The air did not ignite — but, true to the medallion, the desert sands did turn to liquid that morning. 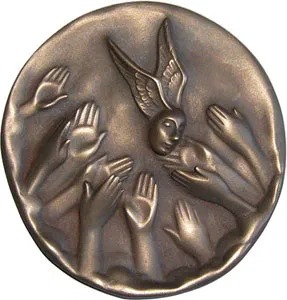 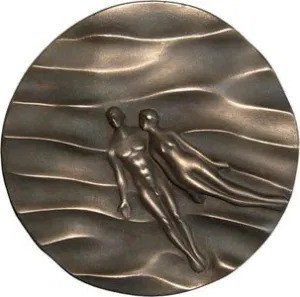 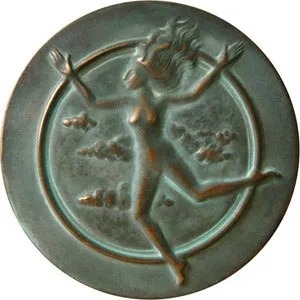 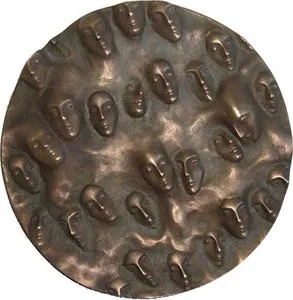 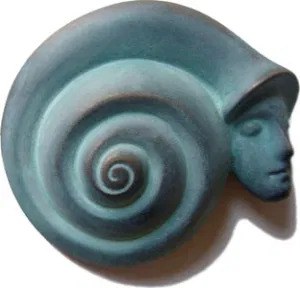 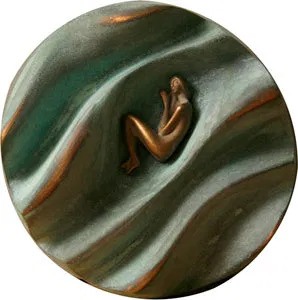 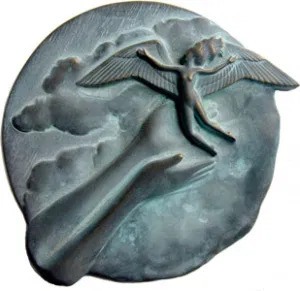 Funny I should think of 1945 in connection with Lindley Briggs. I have a nagging sense that something else happened that year, something of great importance to Lindley.

A milestone in the history of medallions, perhaps? I’m riffling through Volume M of the complete Wikipedia, which fills three rooms of my house … Alberto Meda, medaillons de boeuf, medallion. Ah, here we go: 1945 was the year President Truman instituted the Medal of Freedom, to honor civilians who contributed to the war effort. And a handsome medal it is. But alas, not as interesting as a Briggs.

I know — wings! Lindley loves to stick wings on everything. And it’s true: 1945 was a big year in wing history. It was the year an aeronautical engineer named Robert T. Jones devised the mathematical theory to describe the properties of a swept wing, the kind that lets planes fly really fast. But that doesn’t sound like Lindley either.

Maybe there was something going on with the nautilus, Lindley’s favorite seashell. Wasn’t 1945 the year the U.S. Navy launched a submarine called the USS Nautilus? Let’s have a look. Nope. It turns out 1945 was the year of the vessel’s decommissioning, not its birth.

Wait, now I remember. There was a birth that year, a significant one. And it happened on this very date, November 10. Seventy-five years ago today, Paul F. and Jane Audrey Beetz, of Watertown, Connecticut, became the parents of a daughter, whom they named Lindley.

A girlish 75, with a serene smile, Harry Potter glasses, and a penchant for bright scarves and big red earrings, Lindley could transpose the digits of her years and still fool plenty of people. Her ideas don’t age — they grow more fun and more confident. And her creations only gain more of a patina, which is a good thing for bronze.

A podcast for the

love of art, in all its ingenious forms

Recent Wonder of the Day