Collecting Japanese woodblock prints began as a hobby. Later it became a way of surviving. 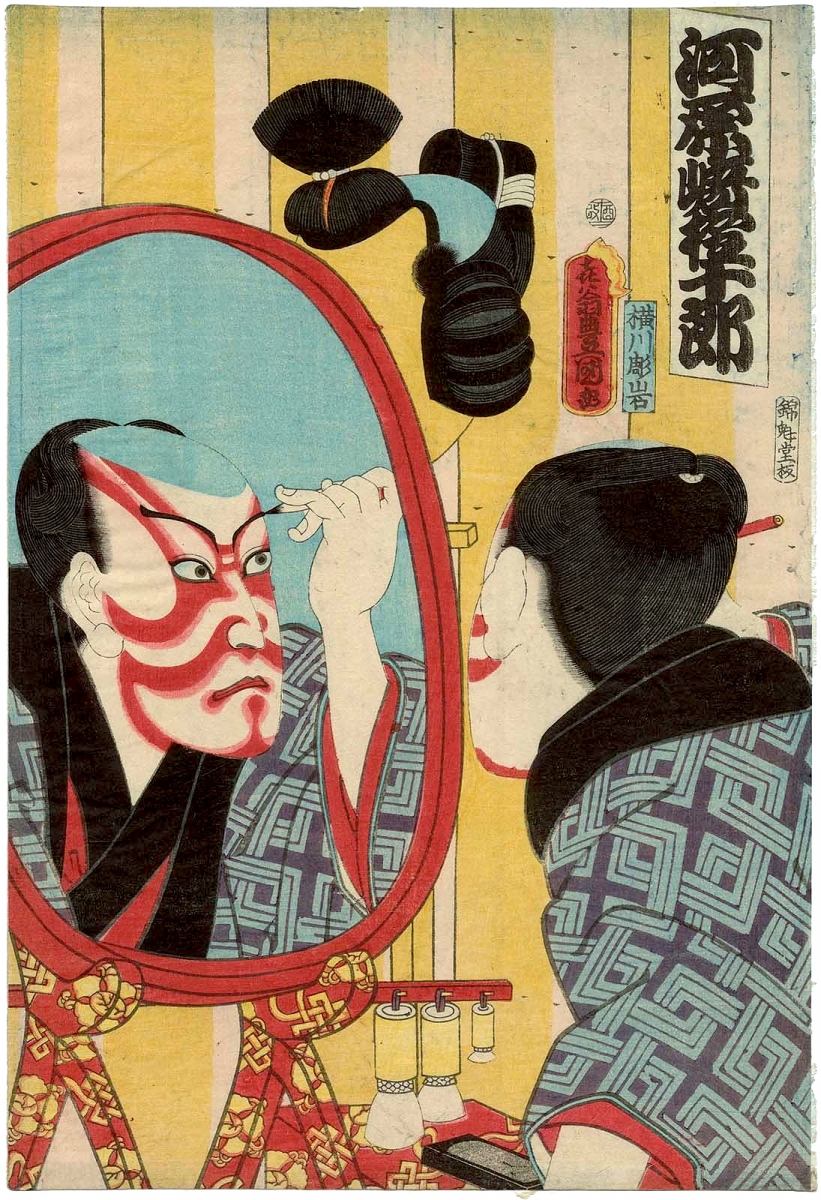 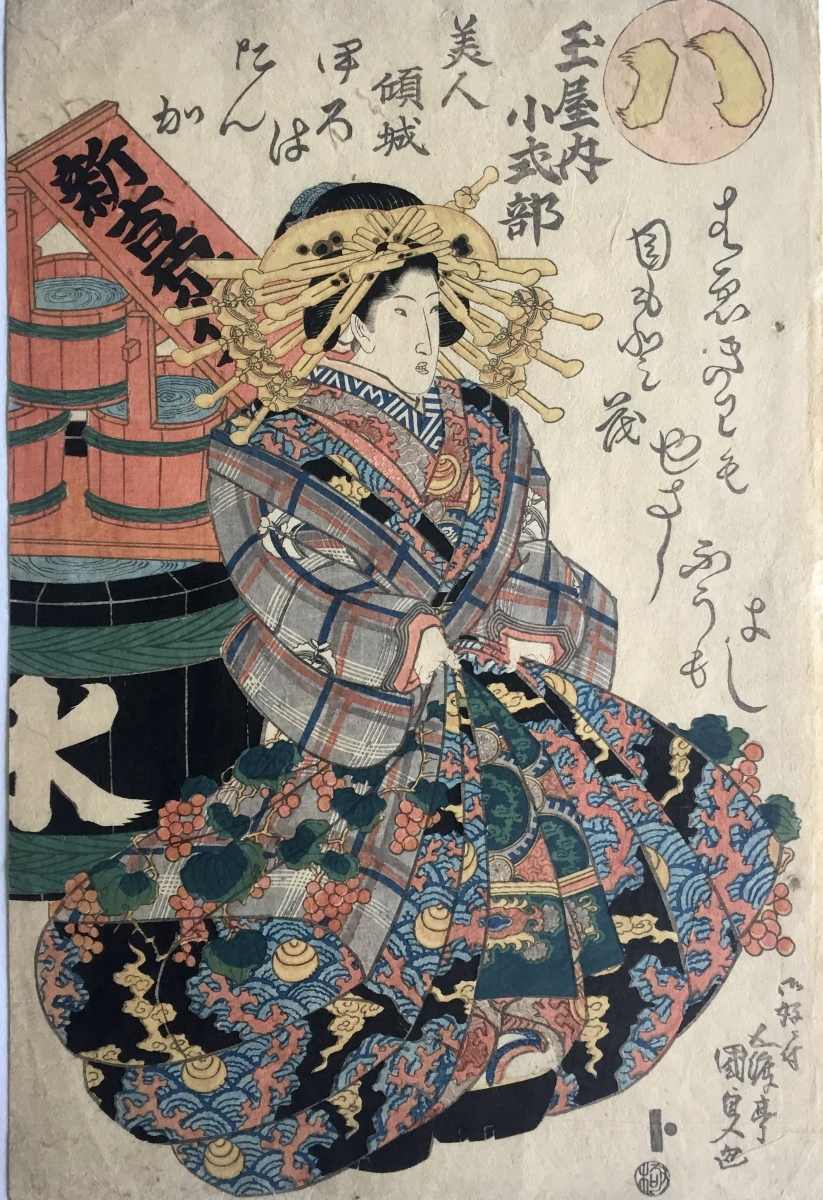 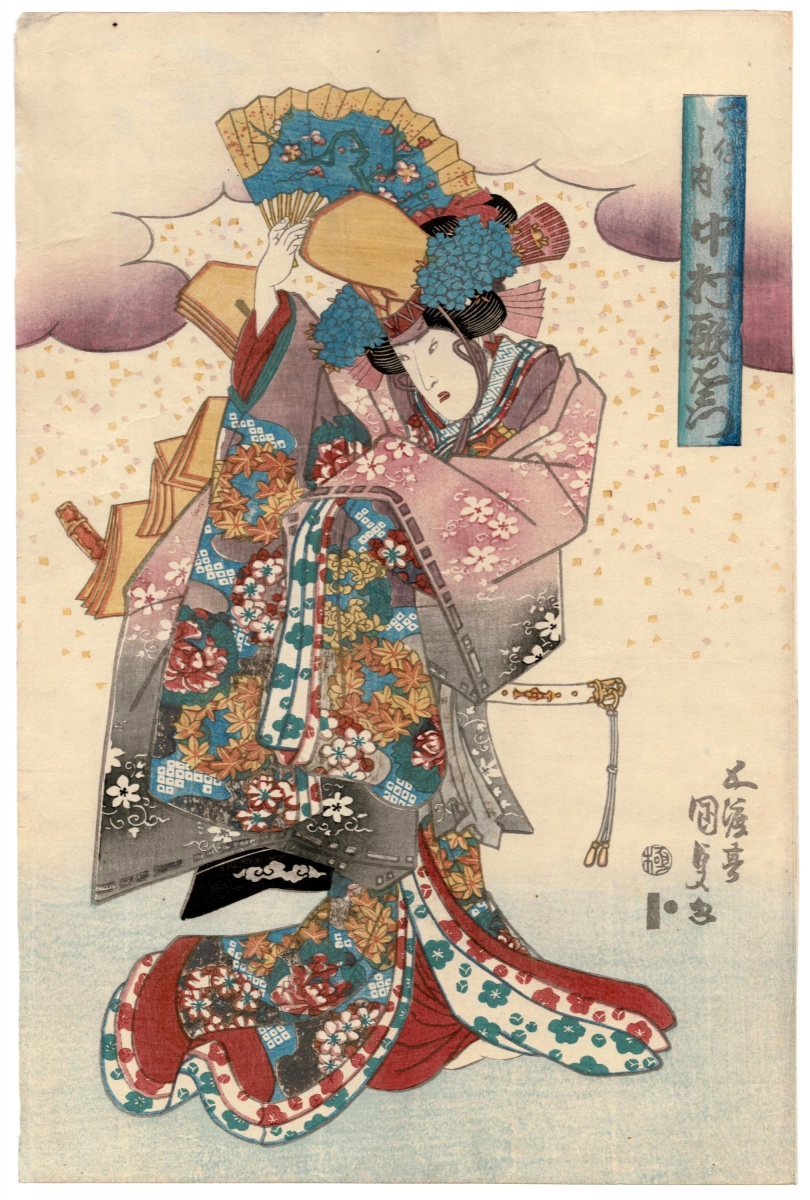 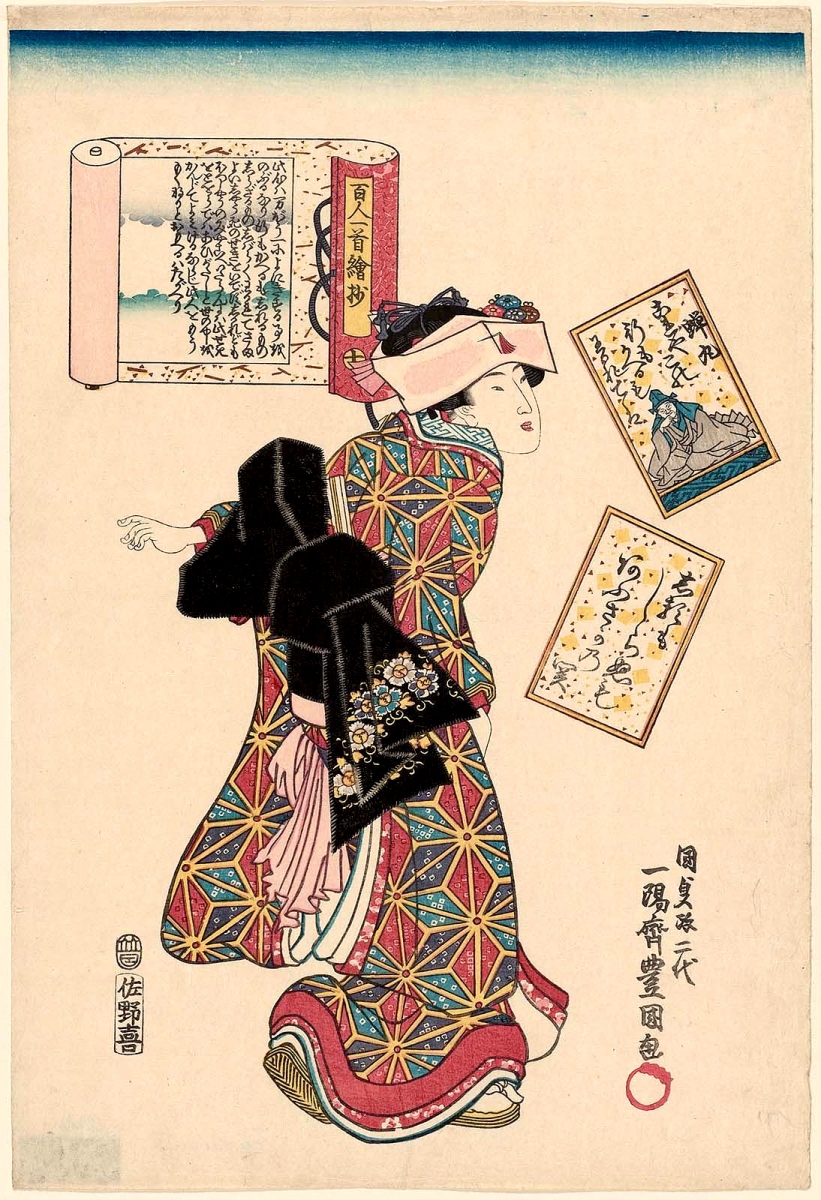 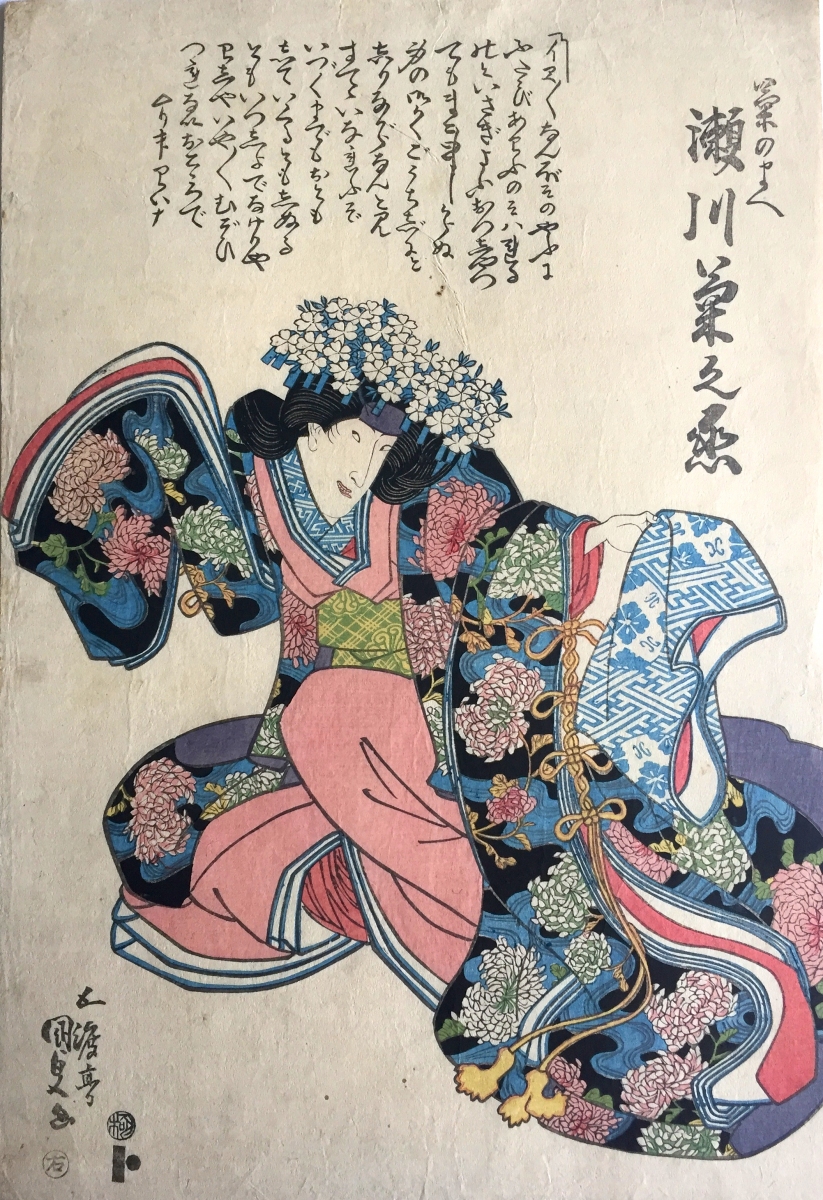 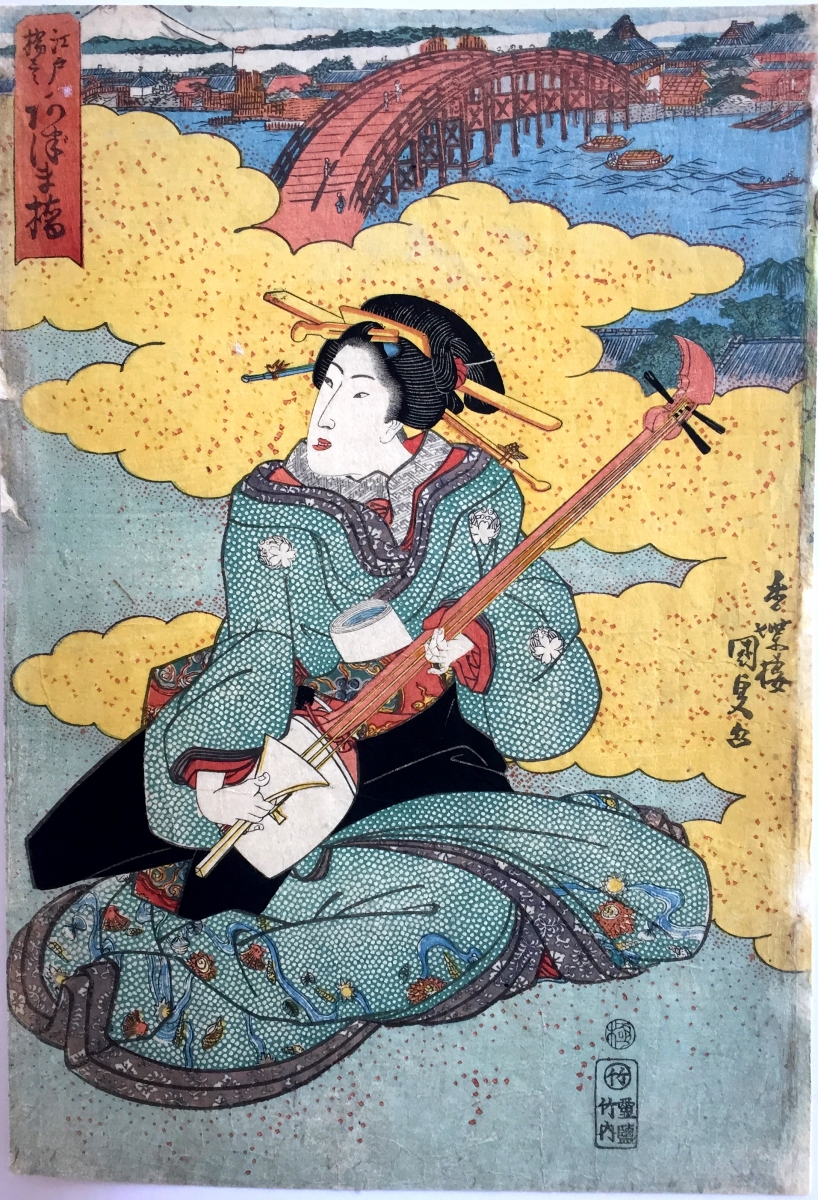 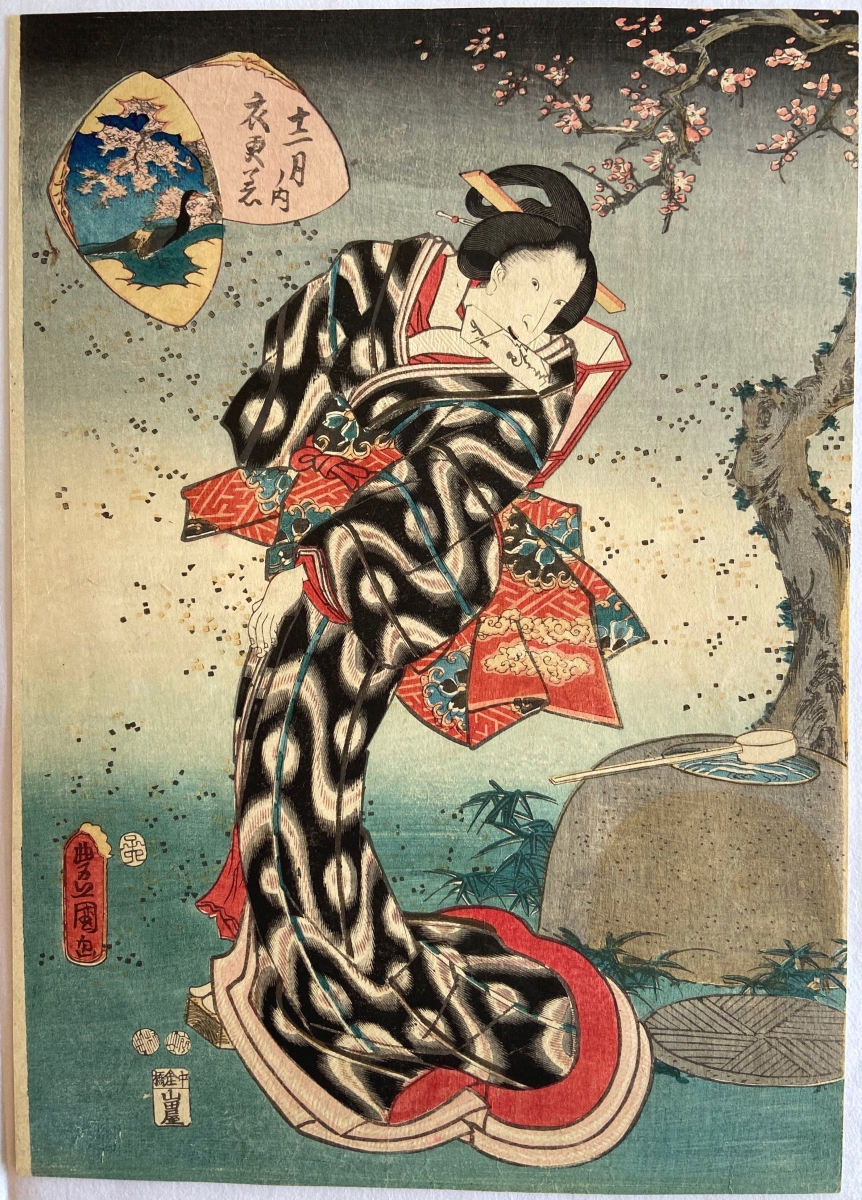 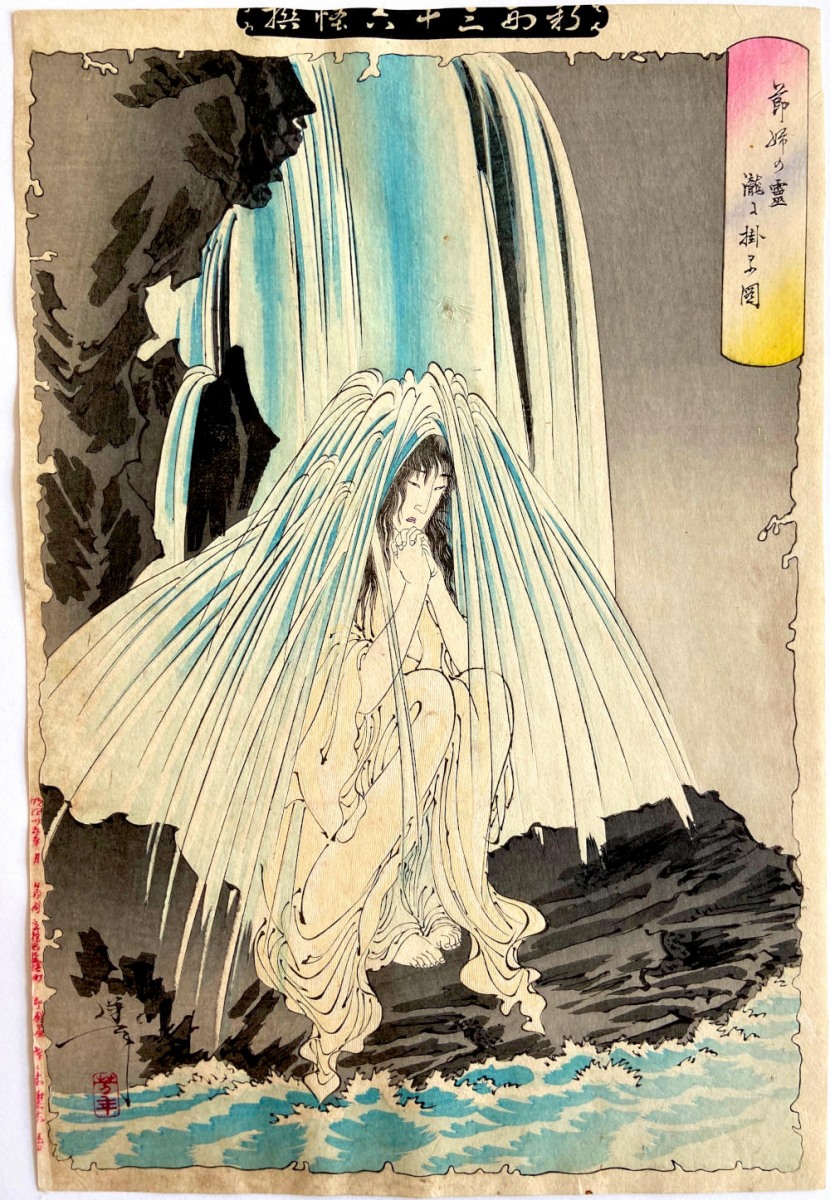 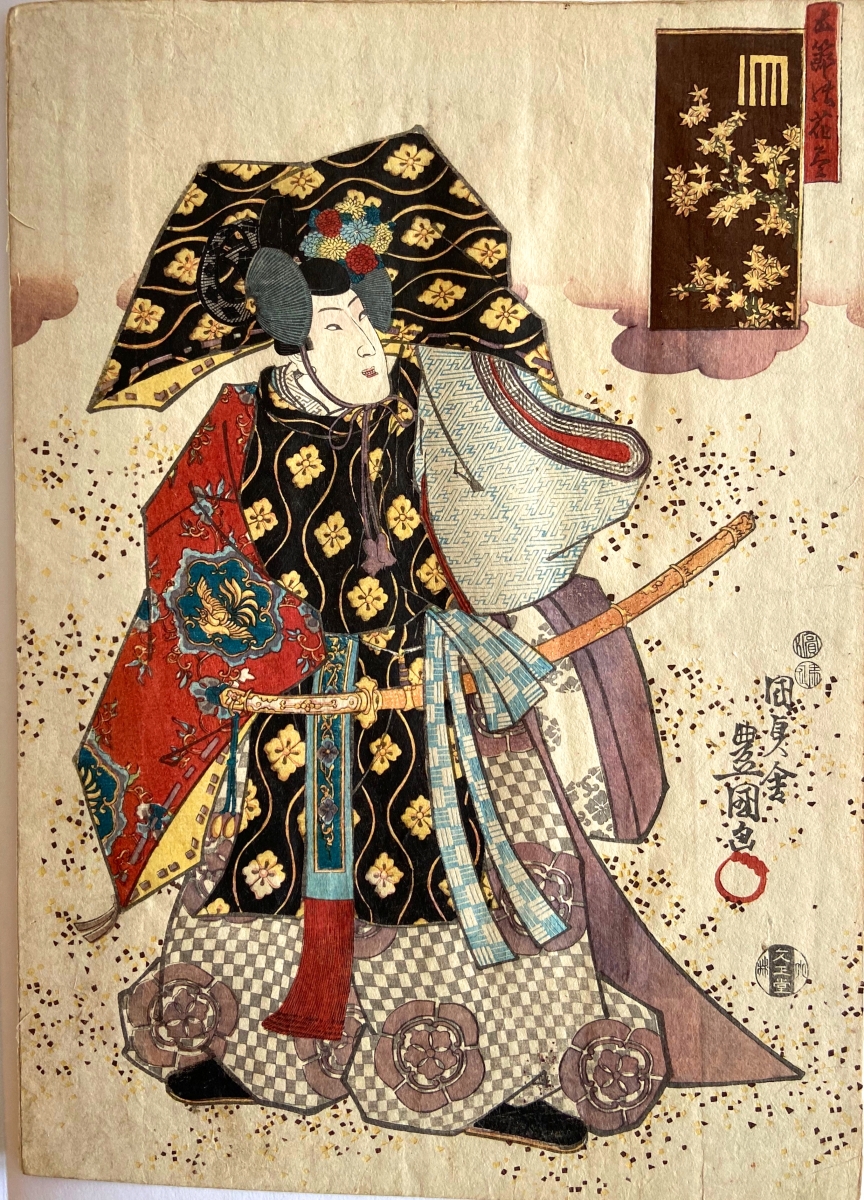 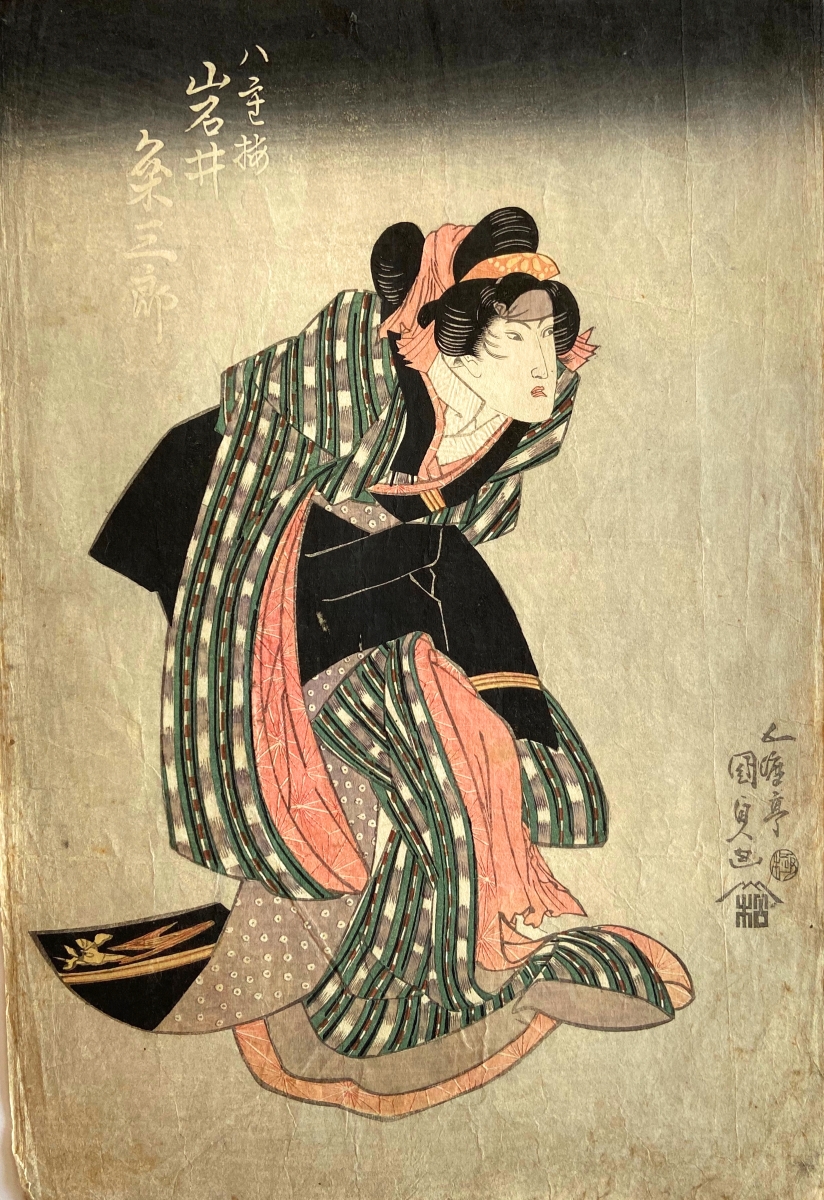 When I was a kid growing up in Washington, D.C., most of the art I knew was European and American, and overly familiar. It bored me. I was drawn to the wider world. I listened to shortwave radio — local stations from West Africa to Latin America. Just turned eighteen, I traveled to Mexico by myself, comfortable in this exotic otherness in a way I wasn’t at home. Then one day, as a college student, I wandered into the Freer Gallery of Art on the Mall, with its collection of art from the Far East and Middle East — Chinese scrolls, Persian pottery with Kufic inscriptions, bronze statues of dancing Hindu deities. This was art that spoke to me.

I was taken particularly with the Japanese woodblock prints. They captured a world that was utterly different from my own, in a style that was minimal without being minimalist, so unlike the filigreed art I had been used to. The lines in these prints were graceful, delicate, pure. I was entranced. It was also a time — the early eighties — when things Japanese were ascendant, part of a cultural moment, and I was swept along. It became an enthusiasm. Much later, it became a way of surviving.

Soon I was visiting Shogun Gallery in Georgetown, alerted to its existence by Tad, a college friend who had spent much of his youth in Asia. I’d comb through Shogun’s collections of prints for sale — not to buy, of course, but for the pleasure of seeing the art close up in a way you can’t at a museum. In the end, though, I was moved to buy my first print: an unsigned Meiji era landscape for forty dollars.

Perhaps I bought it from the guilt of being a frequent browser, but even so, I was delighted to hold this thin piece of paper with my fingertips. An artist had drawn the picture, a craftsman had carved out the woodblocks, one for each color, and a printer had held this paper in his hands as he applied it to the colored blocks, to create this unique piece of art, more than a hundred years ago. I put it in a simple frame and hung it in my bedroom to admire.

In my early twenties, with more cash available, I splurged and bought a print at Shogun by Utagawa Kunisada, from his early-1840s series One Hundred Poems by One Hundred Poets. Almost the entire series — yes, there are one hundred — pair a bijin (a beautiful woman in a kimono) with a poem from a famous collection of mostly Heian-era poetry first compiled in the mid-1200s. The prints, like all Japanese woodblocks in the 1800s, were created for a consumer market. Rich people collected them, but they were mainly the province of the growing middle class, inexpensive art to pin on their walls as decoration.

Kunisada, who lived from 1786 to 1865, was the most prolific Japanese woodblock print artist in the 1800s, and far more popular in his time than now more famous artists like Hokusai, Hiroshige, or Kuniyoshi. Kunisada created an entirely new type of print: portraits of famous kabuki actors striking poses in full makeup and costume. Prints of beautiful women, his other specialty — of which he created more than a hundred series in the 1820s alone — were elegant and sumptuous; they set fashion trends in Edo (as Tokyo was known), a city of more than a million.

The print I bought was Number Ten in the One Hundred Poems series, from 1843, a young woman moving gracefully in an eye-catching red kimono with geometric patterns, matched with a poem by Semimaru, a poet from around 900. It was sublime in its combination of simplicity and elegance, motion and stillness.

A few years later, in the mid-1980s, I was living in London, and not far from my Islington basement flat was the Japanese Gallery, run by a Brit and his Japanese wife. I was in my element again, and would flip through the bins of prints, all priced far below what they would have sold for in the U.S. in this pre-internet age.

Profligate, I mostly bought prints by Yoshitoshi, whose spare late works from the 1880s and early 1890s — particularly from the One Hundred Phases of the Moon and the New Forms of Thirty-Six Ghosts series — appealed to me. I was becoming a collector without even realizing it, though not a fancy-pants collector. Most of my prints were less than perfect, and in this art world, condition largely determines price. I also bought two more of Kunisada’s One Hundred Poems prints, and a few bijin prints of his. (For sticklers: beginning in about 1843, Kunisada took the art name of his teacher and mentor, Toyokuni — becoming Toyokuni III — but at root he’s Kunisada, so I stick with that name.)

When I got back to the States, I framed as many of the prints as budget and wall space allowed. After my wife and I moved into a new house in 2001, a rotating series of framed prints fought for display space with other art. Soon most of the prints were carefully stacked in the closet of my young son Jeremy, where it was cool and dry year-round. Every couple of years I’d take them all out for an appreciative examination, or to show another aficionado. But amid the rush of work and family life with two children, my love of the art — and certainly the collecting — went dormant.

Then came an extraordinarily sad Halloween, October 31, 2015. That evening I found myself sitting on a bench at the Merrimack Premium Outlet mall in New Hampshire, waiting for my wife and daughter to finish their shopping. We had fled our home in Arlington, Massachusetts, for a few hours, not having the stomach to face young trick-or-treaters. Jeremy had died in early September, at age fifteen, taking his life the weekend before starting his sophomore year at high school, and we wanted to be far away from children in costumes — Jeremy had loved Halloween as a little kid, and too many memories were already in the air. Driving for an hour and then wandering stores was a good antidote, but there was just so much shopping I could do.

So there I sat, staring at my fairly new iPhone — a novelty after years of stubbornly holding onto a flip phone — and found myself on a Japanese woodblock print dealer’s website. What drew me there I can’t now recall, but among all the other prints, I saw Number Thirty-One of the One Hundred Poems series, a young woman toting a water vessel, standing on a curved wooden bridge. Kunisada’s series, with its cartouches of the poem and a small caricature of the poet, had been a constant all these years, and I was drawn to it again. The print’s beauty spoke to me all the way from 1843, gave me some small whisper of hope amidst the overwhelming sadness and desolation. Call it retail therapy — or art therapy — I ordered the print.

It gave rise to a healthy distraction from my life: I’d collect prints in the One Hundred Poets series, just as I’d done with the Yoshitoshi prints thirty years before. I started scouring eBay, having quickly realized that dealers tended to charge more than double auction prices (they have to make a living, after all), and now and again finding prints from One Hundred Poems. They were harder to find than I had thought, but I spent so much time looking at Kunisada prints that I grew to appreciate the astonishing variety of work that he had produced. I bought books on Japanese prints, and discovered the Kunisada Project, an online compendium of more than 20,000 of his prints. I made friends with Horst Graebner of Germany, who ran the site.

Back in London in the 1980s, I had bought a striking Kunisada print of a beautiful woman clenching a scarf with her teeth, but now realized that this was in fact one the many kabuki actors who specialized in female roles. Soon I was drawn to actor prints from the 1820s to the 1850s, and came to recognize the actors on sight: Nakamura Utaemon IV, graceful in his younger years, playing the heavy as he got older; Segawa Kikunojo V, looking oh-so-alluring in various female roles; Ichikawa Danjuro VIII, stern and resourceful.

I had truly become a collector, to the slight dismay of my wife, but she understood that it helped me cope with our loss. And it helped bring new connections. I followed artist accounts on Twitter. Then I started my own Twitter artist account for Kunisada, to help get his work out into the world. I’d post two or three prints each day — mostly from the digital collection of Boston’s Museum of Fine Arts — and soon had hundreds of followers, some of whom connected with me over our mutual love of Kunisada’s art. I started accounts for two other favorite artists, Kuniyoshi and Hiroshige. I’ve learned so much from simply absorbing the art, posting more than 7,000 prints in the past few years.

The beauty and artistry of the prints pulls me in, but what keeps me coming back is finding more to see each time I look at them. Take Kunisada’s print The Second Month, from the series Twelve Months, created in 1852 — a year of astounding productivity, in which Kunisada completed at least fifty series. At first glance, it’s a typical pose for a beauty, but the detailed feathering on the kimono is astounding, with physical texture added to the outer edge in a pattern. The hair style is distinct, one loop back over the top, held in place by a single wooden hairpin, as she grasps a folded letter in her mouth. Then I look at the obi, the sash folded carefully and knotted in the rear — the intricate design is striking. Even her keta is a surprise, a yellow wooden block peeking out from the kimono, barely showing a socked foot.

Matt Brown, a New Hampshire artist, is drawn to that kind of beauty, too. I had bought some of his landscape woodblock prints around 2012, but it wasn’t until a couple of years ago that we discovered, through Facebook, our mutual love of Kunisada prints. Matt wanted to put on a show of Kunisada prints early this year at his gallery in Lyme, New Hampshire, and generously asked me to co-curate it.

We waded through our collections together, and came up with a strong sampling, framed the prints, and mounted the show, which opened on January 24. At the opening reception, Matt demonstrated techniques for creating woodblock prints, and we both talked about Kunisada’s art and what it meant to us.

There was a small but appreciative crowd, sharing our love of this art, which has endured for nearly two centuries, giving meaning and beauty to so many people. I pointed to my first Kunisada print, Number Ten in the One Hundred Poets series, hanging with another print from that series. As I spoke, I realized that art — and for me, this art — has the potential to heal, too, if only we let it. ☾

TAYLOR McNEIL is an editor and writer at Tufts University. After earning a B.A. from George Washington University, he worked as a paralegal, a researcher for a public policy consulting firm, and a program evaluator for the federal government — earning an M.Sc. from the London School of Economics and Political Science along the way. He later turned to writing, working at newspapers and then Boston University, where he was editor of its alumni magazine, before beginning to work at Tufts in 2007.